You are here: Home / Self Confidence / What Others Think About You Is Worth Diddley Squat

Have you ever worked at a place where it just seems like the people around you don’t trust anything that you do? Now, granted, this is probably because you’re either new and haven’t built up that trust yet, or you just don’t provide a full story with everything that you do, so they can’t see every step of the way. 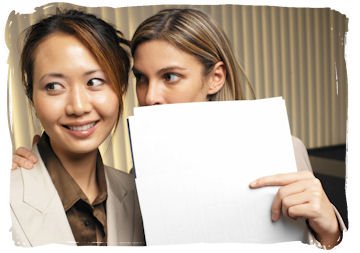 “Let me whisper in your ear, you look to the camera-left, and we’ll pretend like we’re talking about the reader… LOLz”

And I can totally understand that, because that borderlines on micromanaging yourself. And that’s a crazy thing to even think about doing. Well, sometimes this could be especially tough, because every little thing somebody says or does can seem like it’s attacking your self-worth and value and the company and in general.

But I’m here to tell you that what other people think about you is worth diddley squat. You know you’re good, you produce good, ethical, and awesome output, and it’s time for you to grow, your confidence and motivation to keep on being awesome. Here are four things that you need to think about:

Number One: What Are Their Qualifications?

Where have they been? What have they seen? What have they experienced that gives them the right to make any type of judgment on you? I’m not saying being belligerent about it, but honestly and truly to help yourself think about the subject better, figure out, hey, if they don’t really know where you’ve been or they haven’t experienced the same things you have maybe they don’t really understand and you should probably give them a little latitude in that regard.

Number Two: Do They Know Who You Are, Really?

I’m talking about, do they really know what you’ve done and accomplished in your career to get you to where you are now? Chances are, only you do and maybe some of your managers from before. You shouldn’t post all your accomplishments in your office or anything like that, but the point is they really don’t know the same history you do and don’t have as great appreciation as you do.

Number Three: Do They Know What You’re Going Through?

There’s a chance you may be under a huge amount of work and aren’t able to share as much information as everyone would like or that you have a whole lot of things going outside of work that are impacting you even minimally in the things that you do. All of your experiences have shaped who you are and what you experience and these will affect your day-to-day. Other people won’t know these things and of course they won’t understand them.

Number Four: Do They Even Know Themselves?

This is the real kicker here. Nobody can fully ever know themselves much less anyone else. So if you’re looking to get away from attaching value to what people think about you, know that they don’t know diddley squat about themselves, much less you, so whatever comments or things they say and do that you think might be attacking you are really just coming out of ignorance and I mean that in an innocent way, not in a hateful way.

Make What You Experience Worth More

It’s time to convince yourself that what other people say, think, and do about you is worth diddley squat if you’re doing what you need to do to get work done properly. Know that they don’t know your qualifications, they don’t know what you’ve accomplished, and they don’t know what you’ve been through. They also probably don’t even know themselves. So let’s cut everybody a little bit of slack, and take these things into perspective, the next time you need to gain a little bit of confidence back in your life.