You are here: Home / Self Confidence / 4 Easy Ways To Be Confident Like A Honey Badger

I’ll admit that I’m a little late on the game on this video, but I had to talk about it. There’s a silly video on YouTube that is a guy narrating a video about a honey badger. Now, I don’t recommend this for too many people because it’s pretty explicit and inappropriate for most; however, it has a really good point. 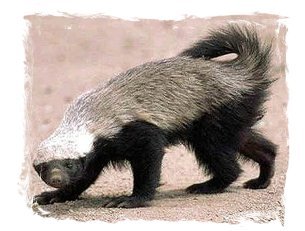 As a matter of fact, it has four easy ways to be confident and bring your life around to honey badger levels of awesome. This is important so you can forget the rest of the stuff out there and just start getting stuff done. That’s what confidence and motivation is about. Here we go:

Number 1: Act Like You Just Don’t Give A Care

A lot of the times, if you do this in a professional and reasonable manner, if you just don’t care about all the little things that normally trip up most people, then it won’t bother you. These won’t be little road blocks that stop you along the way to the goal that you’re trying to achieve.

Number 2: Act Like You Have Millions Of People Who Admire You

I don’t mean this in a chauvinistic or egotistical way. I mean to pretend like there are a ton of people that actually rely on your output, and you, to be alive to provide them with value.

Be so interested in everyone that’s out there, that you are doing awesome things that benefit their lives. Yes, that’s not quite what the honey badger was doing, but it’s flipping it up and making it useful.

Number 3: Act Like You’re Important, Even If You’re Not

You know, there’s a saying out there that says, “fake it until you make it”? Sometimes, that can be taken too far and not useful. For instance, like your bank account. Don’t go be buying cars that you know you can’t afford. That won’t help you, but, if you need to jump in there and get a lot more stuff done, sometimes you have to say, “Yes, I will be able to do this for you.”

You may not have all the perfect skills that you need right at that second, but you’re willing to learn it, you’re willing to put in the time and effort to get to that level, and deliver awesome results. You can do it!

Number 4: Have People In Your Life That Think You’re Awesome

Granted, this is hard to set up in an artificial manner, and I don’t recommend any artificiality to it, but you should be at the point where there are family, friends and other people that just think, “Hey, in some aspects, this person is all right”. They should be able to say a couple words about you, when asked, that have something to do with just about how awesome you are and your ability to get stuff done.

Their thoughts, their emotions and their confidence in you helps propel you and project you forward in the things that you want to get done. And hey, your ability to be an awesome outputer, may go viral at work. Sure, you might not be able to make YouTube videos that get millions and millions of views, but you’ll become that person that just gets stuff done and doesn’t worry about the bee stings.

Be That Honey Badger and Get On With Your Bad Self!

If confidence is a problem in your normal routine at work and at home, I’ve got a fix for you. Build up your esteem, start being that honey badger level of awesome, and you don’t have to worry about all these little things around you. You can get stuff done when you choose to act like you just don’t care.

Act like you have millions of people who rely on you. Act like you’re important, even if you’re not quite there yet. And, have people in your life that think you’re awesome. It’s time to take on the honey badger persona and be a go getter that cuts through all the mess and gets goals accomplished.