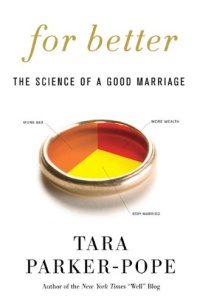 For Better: The Science of a Good Marriage

Pros: I really enjoyed the author’s examination of the abuse of statistics that is so rampant now-a-days and how detrimental it can be to the individual’s perceptions.  Not enough can be said about this subject and it was a great way to open this book.  Some great insight into marriage types, tactics, pitfalls, and history.  The exercises, quizzes, and decent consideration of ecologies involved in marital decisions were good.

Cons: Can be a bit TOO scientific at times.  I am almost wholey disturbed by any literature on such a HOLY union as marriage without any real reference to one of the ultimate goals of marriage: mutual assistance on the path to the Beatific Vision.  However, I acknowledge that this book’s scope was purposefully chosen to avoid this major facet of marriage.  So be it, but it may turn some people off.  I also picked up on a bit too much bias towards not having children… again… kind of minimizing one of the main gifts of marriage.

Assessment: Worth the buy. I would lean toward the printed version as the quizzes really must be seen / worked to be effective.

My notes for this book are below and I have a Scribd version available, too:

“The real soulmate is the one you are married to.” -J.R.R. Tolkien

–       Some say the odds of staying together are no better than a coin toss, but this is a faulty statistical interpretation

Typically, the divorce rate numbers advertised for any given year is based on the number married for that year compared to number divorced that year.  The overall rate of marriage is dropping, life expectancy rates are increasing, and divorce rates are increasing.  This method of statistical analysis is not logical and gives no useful information.  These misleading statistics whittle away at the collective confidence of the married and potentials.

California mice & Prairie Voles mate for life, help out, and return to mate.  The Prairie vole GREATLY differs from its cousins.  Vasopressin & Oxytocin are the “cuddle hormones” that seemed keep them together.  A drug injected into the vole to block vasopressin made the vole become a jerk.  An injection in a ‘cold’ pair turned them into lovey-dovey-fun-time voles.

Trends on social influence on a relationship / marriage do affect fidelity.  For instance, those who cohabitate before marriage have a higher divorce/unfaithfulness rate than those who habitate after marriage.  Less stigma now on those who are less faithful which appears to enable some.

Research shows that men aren’t necessarily less faithful than women, but that women could be more likely to lie about it.  A study involving 4,884 women showed an anonymous survey response of >6% of women were unfaithful, while a face-to-face interview showed ~1% were unfaithful.

As part of resisting temptation, men tend to go about it the wrong way by saying, “resist, resist, RESIST!”  The tendency with this method is to focus on how much the person wants something and then to try and convince himself how much he doesn’t want it.  Instead, the man should fill his head with thoughts of the person he loves or look at his/her picture.  Think of warm and loving thoughts… not sexual desires.

In order to increase the chances of females to find a genetically more compatible partner, scientists suggest getting off the pill.  Hormonal contraceptives (e.g. – the pill) have been shown to blunt our natural instincts about MHC differences.  Research suggests that a woman should be wary about choosing a husband if she is on the pill.

There was a long talk about sex on interest, chemical responses, frequency, et cetera.

Better Sex Exercise: Think about 5 things you want your partner to do during your encounters that would give you more pleasure (not acts/positions – more like “talk more”, “be more adventurous”, etc.).  Compare your lists and make actions to improve.

Studies on word choice can hint at how needy someone is.

In arguments, the first 3 minutes tells you everything and determines the course of the rest of the conversation.  Partners will upset and annoy each other, the point it to focus on the issue and not the person.  Go with ‘complaints’ NOT ‘criticism’.  Avoid the word ‘you’.

–       If needed, then take a time out to collect thoughts – no storming out – schedule time to handle later

Author then goes on to explain how much work being a parent can be and how much strain it can put on the relationship.  [she appears to be VERY biased towards no children]  She comes around and states, “the message isn’t ‘don’t have kids’ it is ‘don’t have kids to attempt to improve your marriage’.”

Lessons on How Couples can Survive and Thrive in Parenthood (according to a fancy study):

–       The path to parenthood makes a difference; those that were ambivalent or ‘just let it happen’ were far more unhappy after child-birth, while those who planned were much better off

–       Try to break gender roles; fathers need to step out of the “bread-winner” role and do some child-care duties and mothers need to give up some of this care and add some trust (this means not micromanaging the decisions for him)

–       Talk/share/be with other parents; many parents benefited from the group effect – makes it more clear that the problems are universal

–       Make time for more than parenting; “check-in” as a bare minimum and ask simple things like “how are we doing?” “what are you thinking about?” and spend 10 minutes or so actually listening/participating in the answer.  Do it for the kids – studies show that a balance of time is better on your health, which directly affects the *quality* of your time with the kids.

–       Hope in the pre-school years; most data shows the stress/time levels don’t go down until the kids are out of the house, but that there is some relief at 3-5 years old as school begins.

Chores can be another big issue in the marriage. Studies show that men don’t have as acute an ability to notice details, colors, textures, etc. and might not necessarily notice a mess in the home.  This hints that there may be a physiological explanation of why men don’t feel a constant urgency to maintain the house.

The Maternal Gatekeeper Theory: the wife asks for a chore to be done and then micromanages how it is done.  The theory holds that men shun housework because women insist on controlling it.  Women claim they want help with the chores, but the men say that the women also want to dictate how the chores are done.  When a man doesn’t do it the right way, the woman gets upset, nags, and/or does it herself, and then the husband gets upset, stops doing it, or does it unwillingly.  It is reported that “gatekeeping” ends up making the husband more lazy and helping less.

The Pros & Cons of Hiring Help: Studies show that farming out duties to hired help is not always the right solution.  It was also noted that those that hired help showed less marital happiness, but for not entirely obvious reasons.

Tightwads (TW) vs. Spendthrifts (ST): It turns out that TW are attracted to ST.

Conflict: those that avoided problems for a while were shown to have had a less happy marriage or breakup later as no issues were resolved.  Couples who had more frequent (but ultimately beneficial… rightly ordered… handled safely) arguments showed greater happiness and togetherness later on as they had addressed most of their biggest concerns.

7 Strategies / Small Changes that Couples can Make to Increase Satisfaction within Marriage: